PET images were acquired from the base of the skull through the proximal thighs.

and for anatomic correlation, but is not of diagnostic image quality.

parenchyma which contains maximum SUVs of 3.6 and mean SUVs of 2.4. Superior

vena cava mediastinal blood pool SUVs are up to 2.1.

There is a very extensive very hypermetabolic skeletal metastatic pattern, with

very hypermetabolic lesions too numerous to individually describe. They involve

contours, all of the lumbar vertebrae and multiple sites in the pelvis and

metabolically active lesions in both proximal femurs. Examples include:

1. An osteolytic lesion in the central and right aspect of T8 vertebral body

2. A slightly leftward expansile osteolytic lesion the left side of L2

3. The extensive osteolytic lesion in the S1 sacral body and left alum (image

hypermetabolic lesions are identified. All other sites of F-18 FDG tracer uptake

between the skull base and thighs are explainable by expected physiologic

localization coursing through the abdomen and pelvis and evidence of excretion

of F-18 FDG tracer by the kidneys and ureter into the urinary bladder.

region, the frontoparietal region and especially the inferolateral right

temporal lobe. There is reduced F-18 FDG metabolic activity in the large area of

noted. No additional new pulmonary nodule. The heart size is normal. No enlarged

The unenhanced appearance of the liver is not remarkable. The spleen size is

gland contains a mass. Unenhanced appearance of the pancreas and kidneys is

unremarkable. There are no metabolically active enlarged retroperitoneal or

There is a small hiatal hernia sac. The stomach otherwise is unremarkable. Small

bowel loops are normal caliber. The colon is not remarkable.

The urinary bladder contains a small amount of fluid. The prostate gland has

the pelvis are noted.

4. Other incidental findings are similar to that seen previously.

Dr. Shao reviewed the CT scan with Robin and me, reporting that the new lesions we must assume are cancer and that they are fast growing. The lesions are in my vertebrae and ribs, and possibly other areas of my body not scanned.

Dr. Shao will refer me to a sarcoma specialist. There may be some drug or treatment that will retard the progression of the disease but there isn’t any known path to a cancer-free future. Dr. Shao’s recommendation is to radiate areas that give me pain and try a chemo treatment to slow the cancer’s growth.

I asked him how long I have. He said in 2005 he never expected me to be in his office in 2021, all to say nobody knows about these things.

At the moment I’m in pain, my hamstring aching constantly from a mysterious injury. The next step is to get a full-body PET scan which may point the way to treating my aching leg. 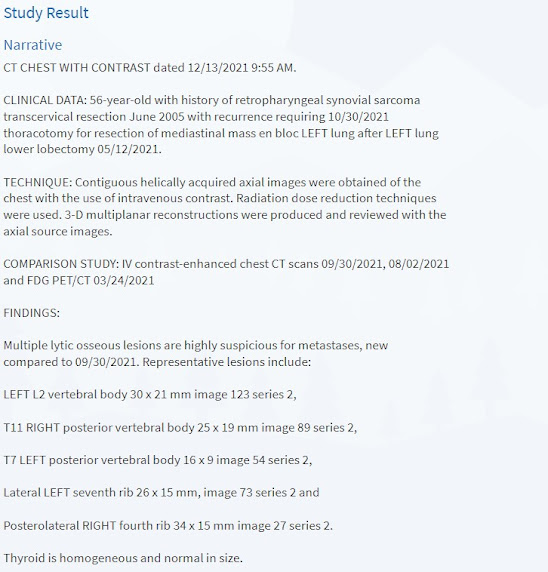 Today's CT scan did not deliver the results I hoped to see. "Multiple osseous lesions are highly suspicious for metastases..." 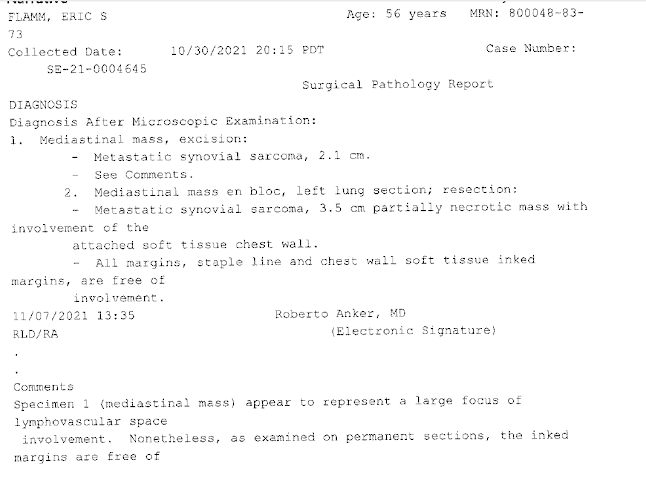 There were no surprises in the report -- the tumor was synovial sarcoma as expected. I'm continuing to put all information on the blog as a backup of medical records. Some of our friends are physicians too, so if I can get free medical analysis I'll take it.

The second operation took place Saturday. The tumor was attached to the lung and chest wall so there was more lung resection and removal of tissue from the chest. The incision was the same as the last time, the surgeon opening the chest at the same place.

It’s Monday afternoon as I write this, happy to be out of the hospital. This time around I didn’t need the opiates as much as before and so feel more clearheaded. I have a variety of pain-management drugs which should work just fine.

I’m hoping to be back on my feet in a few months and looking forward to going skiing. I’m so happy to be home. A hospital stay makes sitting on the couch watching television seem like a luxury vacation.

I spoke with a radiation oncologist today (telemedicine!). All the doctors agree. The next step should be an operation to remove the tumor.

The consultation was informative in that stereotactic body radiation therapy (SBRT) can be helpful in treating sarcomas – but it is still the second choice after surgery.

The meeting with the surgeon Dr. Kai Engstad went well in that he saw no reason not to recommend surgery – his remarks are above. This means that a cancer-free future is still possible.

Engstad warned the complexity of the operation is higher than before because the tumor is in a region that was recently operated on. Scar tissue, flesh reconstituting after disruption, can make for tricky going. Also, the difficulty of the procedure may be increased depending on what surfaces the tumor has adhered to. There is no way to know these finer points without opening me up.

Although Dr. Shao has said that this type of cancer, synovial sarcoma, can not be treated with radiation, I will consult with a radiation oncologist. This is to understand thoroughly what radiation can do in this case. If there is no significant benefit, Dr. Engstad would prefer to skip radiation as this would create more irregular surfaces in the area to be excised.

My main fear is that these surgical procedures become a game of whack-a-mole. The thought I had 16 years between bouts of cancer makes me optimistic I can have another good run.

Many people have acknowledged the difficulty of this period for me and my family. I am so very grateful to receive words of support and empathy. I am comforted that I am part of a web of significant relationships that have defined and enhanced my life. I hope that by posting the details of my cancer treatment here I can skip recounting them in conversation. I don’t know if I will live a long or short time, but either way I prefer to minimize the black thoughts and try and find a positive headspace. So much is unknowable.

I will have a telemedicine consultation with the radiation oncologist later today. As always, I will post all information here.